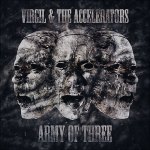 This is the follow-up studio album to Radium and is raw attitude whether it is from Virgil’s power driven guitar playing, rocky vocals or his brother Gabriel on drums or Jack completing the rhythm section.

VATA are an immensely talented and exciting trio of musicians who deliver rock with a generous twist of blues both in the studio and live. This album sees them taking a giant stride forward as the sound matures, especially Virgil’s vocals that are deeper and rougher as they belt out the lyrics across the full sound of music.
Army Of Three is a rock album where the talented producer Chris Tsangarides has managed to bring tonal texture into the sound being produced with repetition creating an anthem like chant that you can hear the audience already joining in followed by a swizzle of guitar and then the use of a pause giving everyone time to reflect this approach as is dramatically used on Blow to the Head with a delay of silence before the following.

The album works in the round and individual tracks are all strong, Love Aggression starts with a gentle and mellow guitar sound with the gentle rhythmic drumming joining in, and Virgil sings in an almost crooner approach to the vocals that work this then opens up as the chorus adds another layer of this passive-aggressive confessional song. Then it is back with a rock anthem on Give It Up full of thumping drums that are hit with a force that sends the vibrations through the whole track – this is deep dirty relating to something deep in the dark side of your soul.

This is an album of transition the rock is winning and Virgil’s vocals work better on some tracks than others where it is stretched, there can be no argument that this is an album full of quality musicianship and Virgil gets out of six-strings a range of sounds that show his dexterity and imagination.

They are more rock that blues but they deliver a sound that is addictive and will hit all the right spots for anyone looking for a young band that wants to play their music loud and in your face with an energetic sound that is about the collective talents rather than just showcasing the swirling guitar licks and riffs from Virgil. They are as the album says an Army of Three who rock and will be an enjoyable addition to any collection that has a bias towards rocking Through the Night, as they sing on the album.

Bluesdoodles gives this CD SEVEN doodle paws out of TEN ….