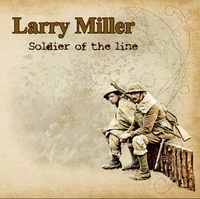 The CD release date 24th November is the ninth Larry Miller album, with every track self-penned there is a control of the guitar and the words take centre-stage in this emotionally charged and reflective album.
The opening track One Fine Day, will be known to many who have seen him play live a guitar driven opening solo with drums then a crescendo of sound from the brass section before a strum across the strings and Larry’s voice joins the party this is the rocky blues Larry is instantly recognised for it is the signature Miller sound. Then the title track, this change in style and tempo makes you sit up and listen Soldier of the Line, opening with the sounds of shells and a combination of cello and melodic guitar intro to this number. Larry was inspired to write this after he saw a film about men suffering from Shell-shock during WW1 it is poignant with the words, driving the message home and on the recording the cello’s cry for you when combined with the simplicity of the acoustic. The lyrics are so powerful “I never met a King who cared for me, but still I fight on….”
Failed Again is a love ballad with a blues story and wonderful combo of bass, guitar and drums it is a track that is complete with Larry’s emotional outpouring through the six-strings that are an integral part of this musician.
We have a rock anthem with the power of Our Time Is Coming with full on sound and wow sounds good in the studio but as you listen you see Larry performing live with his indomitable energy.
The album is full of tones and contrasts with Mississippi Mama a foot stomping blues, then power blues to open the album and love ballads and Bathsheba with the tinkling keyboard introduction before the guitar joins in deep and slow with the vocals ready to tell the story this is classy love blues. This album sees Larry at his finest full of controlled musicianship he knows how to play the blues from the darkest to the lightest of touches his guitar and vocals combine to make every track count.

Bluesdoodles gives this CD NINE doodle paws out of TEN ….

GET YOUR TICKETS FOR THE ALBUM LAUNCH NIGHT AT THE JAZZ CAFE IN CAMDEN – TICKETS FROM £15 OR TREAT YOUR SELF TO VERY LIMITED VIP TICKETS IN THE RESTAURANT. ~ CALL THE TICKET HOTLINE ON 0844 847 2514 BUY ONLINE – CLICK HERE